If you want to see your friends and family who have fallen away from the church, non-readers of the Bible, and/or unchurched people get the message, The Message Catholic/Ecumenical Edition gets God’s Word across in an up-to-date, heaven-sent, down-to-earth style.

When I learned that Acta Publications now publishes an edition that includes the deuterocanonical books (aka Apocrypha) translated by Catholic scholar-writer-translator William Griffin, I requested a review copy, which they kindly sent.

Interestingly, my copy arrived right when my discussion group began a study of Revelation – a book that most people, including those of us who are lifelong lovers of the Bible, find difficult. Often, however, the difficulty comes in the approach.

In its Introduction to Revelation, The Message emphasizes the poetic vision John received as he worshiped God on the Lord’s day, giving us this to consider:

“The Bible ends with a flourish: vision and song, doom and deliverance, terror and triumph. The rush of color and sound, image and energy, leaves us reeling. But if we persist through the initial confusion and read on, we begin to pick up the rhythms, realize the connections, and find ourselves enlisted as participants in a multidimensional act of Christian worship.”

As letters to a group of mainland churches on John’s pastoral circuit, “Revelation is not easy reading. Besides being a pastor, John is a poet, fond of metaphor and symbol, image and allusion, passionate in his desire to bring us into the presence of Jesus believing and adoring. But the demands he makes on our intelligence and imagination are well rewarded, for in keeping company with John, our worship of God will almost certainly deepen in urgency and joy.”

Presumably, this Introduction can be found in every edition of The Message since New Testament books are the same, regardless of church affiliation. In every edition of the Bible (Protestant, Catholic, or Jewish), the Torah also remains the same with each of those first five books or Pentateuch including Genesis, Exodus, Leviticus, Numbers, and Deuteronomy. However, the books of history, wisdom, and prophecy vary.

For example, the Catholic/ Ecumenical Edition includes such deuterocanonical books as Sirach among the other wisdom books of the Bible, offering such wise sayings as: “Child, look closely at your soul. Examine your life. If you come across something obnoxious, stop doing it,” 37:30.

And, speaking of wisdom, Sirach 38:25 also says, “Wisdom in the life of a scribe comes from quiet time. Writers who down-size their workload upsize their wisdom output.”

In the writings of the prophets, we find the deuterocanonical book of Baruch, placed after Jeremiah and Lamentations since the author might have been Jeremiah's scribe -- or not. Regardless, chapter 5 prophesied the return of the exiles, saying: "Jerusalem, get rid of the dull clothes of grief and put on your best dress, the clothes of glory meant for you from all eternity. Wrap yourself in a lovely layered cloak; pick one from the justice collection. On your head put a crown in honor of the Eternal One." Then, "At the command of God, forests and fragrant woods will spring up to provide shade for the returning pilgrims. God will lead Israel home with joy, lighting the way with the majesty, mercy, and justice only he can command."

In the historical writings, we discover a variety of histories from the deuterocanonical books. For example, The Message Catholic/ Ecumenical Edition includes 1 and 2 Maccabees in the books of history, giving us texts about what went on during the time between testaments.

As the Introduction to 1 Maccabees tells us, somewhere around 167 B.C., “one of the Gentiles who’d won a previous battle against Israel approached a Jewish priest named Mattathias and politely demanded that he sacrifice to Zeus right there on the street in front of everyone. In a calm but firm way, the king’s agent explained the options: Sacrifice to Zeus or die. Overhearing the conversation and judging where the power currently resided, one Jew walked right in front of everyone and began to worship Zeus. Without a second thought but energized by a lifetime of fidelity to God’s word, Mattathias drew his sword and whacked both the gentlemanly agent and the idolatrous Jew to death.” As you might imagine, the story doesn't end there but continues throughout both books of the Maccabees.

From Genesis to Revelation, however, the whole biblical adventure continues in exciting, everyday language that clearly shows the Bible as it's meant to be known: THE message of our ongoing adventure with God.


©2014, Mary Harwell Sayler, reviewer, is a lifelong lover of Christ, the Bible, and the church in all its parts. She’s the traditionally published author of 27 books in all genres, including the poetry.

Mary Sayler
Mary Sayler is a Christian poet, writer in all genres, and lifelong student of God's Word. Her many books include A Gathering of Poems and Talking to the Wren. Recently she collected most of the prayers in the Bible into a prayer book paraphrased in everyday English then in the King James Version only. She also collected God's promises in the Bible and responded to each with a contemporary prayer for the book Kneeling on the Promises of God.

God's Word wants to speak to you! Find a Bible translation you love. 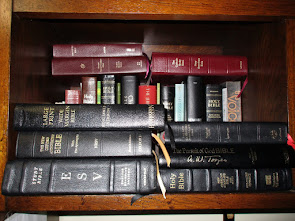 To find your favorite Bible, Search by title or scroll through prior posts.

Buyi Books through Links on this Site

“As an Amazon Associate I earn from qualifying purchases.”